Promoting a DevOps culture has become essential to secure communication and collaboration within a software team. Establishing an excellent Continuous Integration/Continuous Delivery standard practice for Google Cloud Composer has a variety of benefits including:

I got the privilege to work with OpenX, programmatic advertising company, building a CI/CD solution for Cloud Composer. The intended audience for this article is anyone who has a working knowledge of Cloud Composer, Jenkins, and Spinnaker and wants a high level understanding of the CI/CD solution implemented at OpenX. This article focuses on the structure and automation of DAG deployments and less on setting up the Spinnaker pipeline.

Airflow uses a concept called workflow, which is represented as a Directed Acyclic Graph or ‘DAG’ to run a collection of tasks in the Cloud Composer environment. Before uploading a DAG to the Composer environment, the following items are necessary in order for deployment to be successful:

Overwriting a DAG file is challenging because of how data synchronization is implemented in the Cloud Composer. Modified DAG files are unidirectionally synced from GCS to the /home/airflow/gcs/dags directory on the workers and the webserver. This periodic synchronization process is eventually consistent.

For the reasons mentioned above,  overwriting a DAG is problematic. It is best to avoid this process. When making any modifications to the DAG, it is best practice to rename and deploy the changes as a new DAG instead. This will clearly distinguish between the older and modern version of a DAG.

It is worth noting that DAGs cannot simply be stopped and started. To upload the newer version of a DAG, there is a sequence of steps that are executed to keep the Cloud Composer environment in sync. Refer to the deploy script section for the automation process. 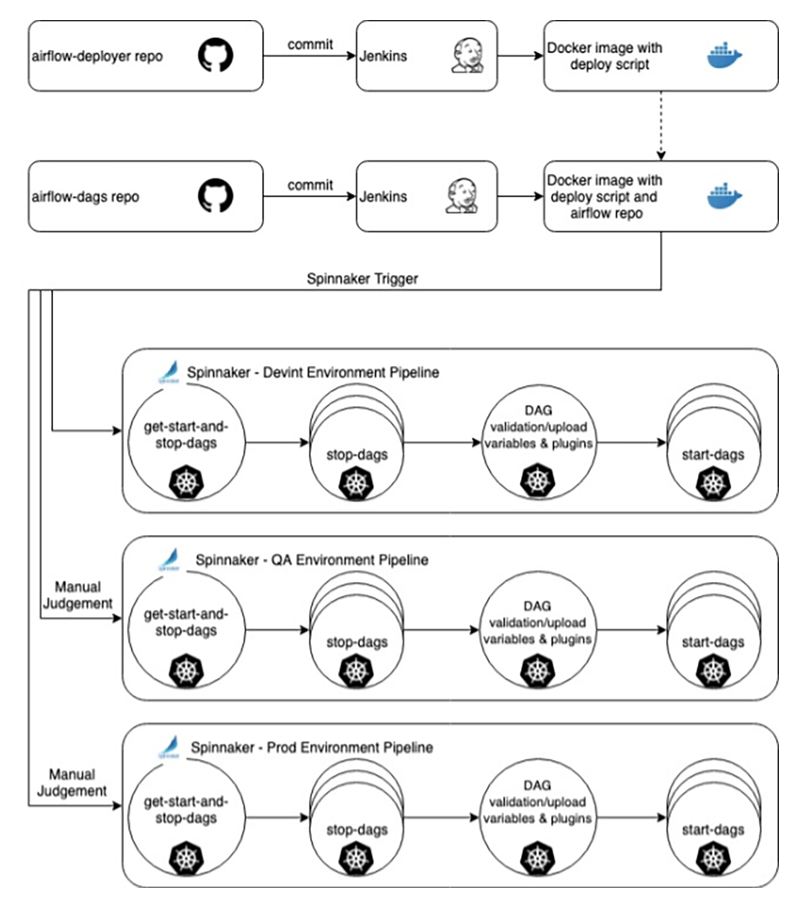 This is a high level architecture of the whole CI/CD process. There are two GitHub repos.  The airflow-deployer repo contains the deploy script to automate Airflow deployment. The airflow-dags repo contains all the necessary artifacts to run a DAG. Both of the repos GitHub webhooks are configured with Jenkins. Once a new commit is made to the master branch, Jenkins triggers the build. At the end of the Jenkins build, the original Docker image will contain the following files and software installed:

Once the Docker image is built, Spinnaker starts the pipeline and closely interacts with the deploy script to deploy DAGs to the Cloud Composer environment.

There currently is no standardized practice yet for structuring an Airflow repo.  Below is the structure assumed by this pipeline. The Airflow repo structure is enforced and helps developers have consistent code organization helps the deploy script search for the right files during deployment. A new configuration file called running_dags.txt file is introduced to help deploy only the DAGs that exist in that file during the next iteration. It takes the opinionated approach of version controlling your variables with your DAG code for ease of integration, testing, and clarity.

This is an example DAG repo that has to be consistent among the team to deploy DAGs properly. Our solution hinges on the repo abiding by the following rules:

For this deployment process, DAG definition files should follow the naming convention of <dag_id>_v_<semantic version number>.py. This is the recommendation for OpenX based on their requirements. The Regex pattern could vary based on the use case. It is important to have a standard naming convention throughout the CI/CD process which makes it convenient to identify and keep track of DAG versions.

In a rollback scenario, the best practice is to revert back to the older code changes, but still increase the DAG version. Increasing the DAG version will create a new unique dag_id that has not yet been run on the Cloud Composer environment. This way the Airflow metadata does not continue to append, but start a new entry in the database.

The running_dags.txt is a configuration file to help organize which DAGs have to stop, start, and continue running during the next iteration. The file should contain only dag_id without the .py extension.

From the following use case, the deploy script will output a list of all the dag_ids that need to be started and stopped. DAGs that are already running on the Cloud Composer environment and exist in running_dags.txt file will be ignored. The implementation can be found in the deploy script section.

The following Spinnaker pipeline shows one iteration cycle after a code has been committed and built by Jenkins. The Spinnaker pipeline main order is to stop the older version of any DAGs, verify if new modifications to the DAGs are valid and then upload plugins, variables, and DAGs to the Cloud Composer environment.

Note: Bake in this use case is the process of generating a Kubernetes manifest file.

Below is a detailed overview of the six main steps from the Spinnaker pipeline diagram.

2. Get DAGs To Stop/Start

Before running the deploy script, we ensured a Cloud Composer environment was already provisioned and had the following Airflow configuration dags_are_paused_at_creating set to True.

Note: The code snippets provided are merely a high level overview to prove the concept. Error checking and miscellaneous actions are discarded to keep this article shorter.

Deploy script contains a menu system for Spinnaker to invoke calls to deploy and tear down a DAG. With this menu system, Spinnaker will be able to call each of the components by providing any of the following arguments:

The plugins folder is a simple gsutil rsync command to copy, modify, and delete any files from the plugins directory. This can also be written with the gcloud composer plugins command, but this will complicate issues in figuring out which files need to be added, modified, or deleted.

To start a DAG, the function uploads the file to GCS and unpauses the DAG. The unpause DAG command does not work the first time because of Cloud Composer syncing issues. It is best to iterate the last command a few times at a minute interval.

Note: Dags usually are picked up by Composer within a minute.

Cloud Composer brings great value for tech companies that need to orchestrate their batch data workflows. The above CI/CD solution was built based on OpenX use case and could vary. The most important parts to note are the high level architecture and the deployment scripts which help solve the DAG versioning in the Composer environment.

If you are looking for additional Cloud Composer resources or information about Spinnaker side of things, check out these resources:

If you still have questions, drop us a line at info@SpringML.com or tweet us @springmlinc.

Acknowledgements:
Big thanks to Jacob Ferriero (Data Engineer Lead at Google) and Miles Matthias (GCP/Spinnaker Consultant) in helping build this solution. And OpenX for giving us the opportunity to solve this problem.