From using base level Tensorflow back in 2016, the open-sourced code has changed quite a bit. With further adoption of Keras, Tensorflow is more high level, making it a lot easier to adopt. Although it took away a lot of the low-level functions I used to write to set up layers and even get arrays into tensors, it will probably not be missed.

With the release of Tensorflow 2.0, the image captioning code base has been updated to benefit from the functionality of the latest version. The main change is the use of tf.functions and tf.keras to replace a lot of the low-level functions of Tensorflow 1.X.

The code is based on this paper titled Neural Image Caption Generation with Visual Attention. This was intriguing to me because it both served my interest in Computer Vision and NLP. Also, it could be a potential use case for our clients as well. When I saw Fei Fei Li talk about this in one of her presentations, I was very impressed by the technology, and now I have the opportunity to try it myself concurrently with the new release of Tensorflow 2.0.

Below are five applications of image captioning: 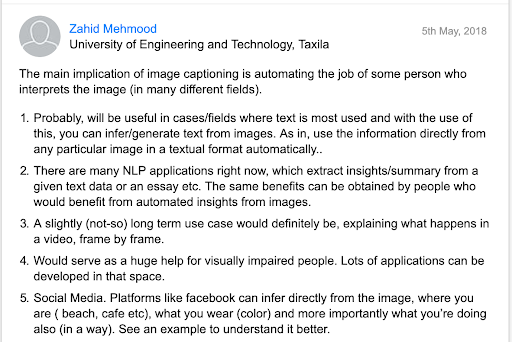 Image descriptions are subjective and every person who sees an image will focus their attention differently. Luckily, the MS COCO dataset has pretty clean descriptive captions. The image captioning with “attention” tries to take a vectorial representation of an image and tries to tie that representation to create a meaningful sentence, according to the paper. It combines the power of Convolutional Neural Networks and text generation with Recurrent Neural Networks as shown in the picture.

Referencing the paper, “as the model generates each word, it’s attention changes to reflect the relevant parts of the image”. This method is quite interesting because according to the paper, it doesn’t use object detection, but “learns” from the images from scratch to look for its “objectness”, which makes the model more adaptable and general rather than be bound by a set of trained objects.

The code is on a Colab notebook, but it crashed quite a few times and sometimes, a GPU was always not available. The original code processed 30,000 images, which was quite a bit. I also had to re-download the datasets every time I exited Colab. I ended up running the code locally and made some adjustments.

Here are some tweaks that I made to the original code:

After removing these words such as “the”, “a”, and “an”, there were words that basically meant the same thing, but spelled differently. For example, ‘house’ and ‘building’, or ‘guys’ and ‘people’ will not count because they are spelled differently, but have similar meanings semantically. Using Google’s pretrained word2vec model in python and the gensim package, if two words were above a threshold, then the word would be replaced with the real caption. This helped in replacing words with similar meaning to the actual caption, further increasing the metric.

In the picture below, house and building are similar in context from MS COCO. 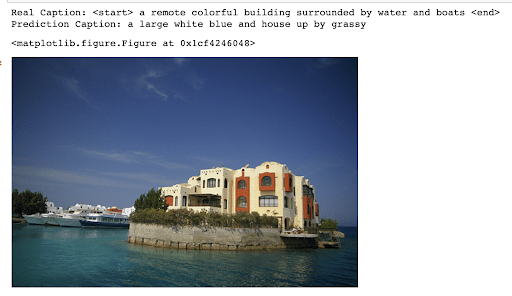 There were some more academic metrics outlined, but that would take time to learn to apply. This was a quick and easy way to judge how well the captions are doing without going into too much detail.

As for the generated image captions, there were some good ones:

And there’s the bad:

Overall, I feel the MS COCO dataset for image captioning has better, clear and concise descriptions while Flickr30K has longer verbose, specific descriptions which makes it more difficult to produce good captions.

As you can see, the real caption here is quite long and the predicted text is not that long.

This is probably why the people who wrote the example used the MS COCO dataset and not Flickr30K. Even in the paper, the MS COCO dataset performed better by their metrics. The authors of the paper also used RMSProp for Flickr8k, while they used Adam Optimizer for the Flickr30k, which is an intriguing choice.

Overall, this exercise helped me:

How to Adapt to a Customer and Improve Accuracy

We can adapt this idea with Tensorflow 2.0 code and many others such as:

And even some Google API use cases such as:

If you enjoyed this post, reach out info@SpringML.com or tweet us @springmlinc. to us so we can show you how we can grow your business and stay competitive in this rapidly changing marketplace with the latest in analytics, Machine Learning, and AI.