The Raptors move to within 1 game of winning Canada’s first ever NBA championship at home in Toronto, winning a second straight game in Oakland 105-92. Even though this was a devastating loss for Warriors fans, let’s take a look at some things that were happening on Twitter.

For game 4, we created a twitter dataset that captured the tweets made during the game.
With GCP tools, we:

After everything was set, we found that a lot of tweets, hashtags, and emojis used before, during and after game 4 including:

Let’s take a look at some of the top 10 hashtags used:

Looks like it is overwhelmingly favoring the Toronto Raptors and people want to see the Warriors go down. #WeTheNorth appears almost 8 times more often than #DubNation or #Warriors.

Let’s take a look at the @’s used on Twitter during this time frame: 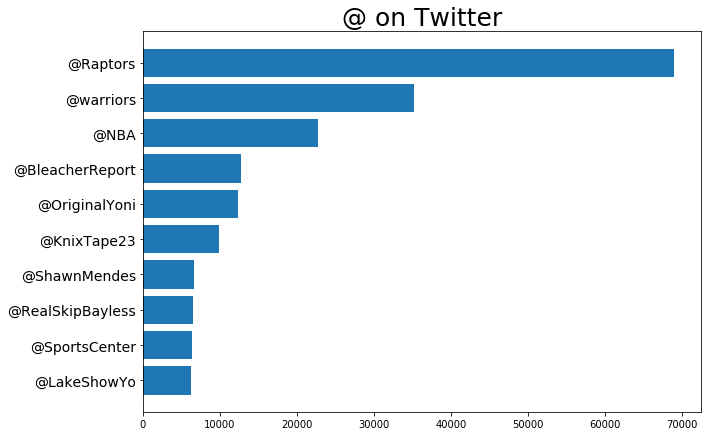 Looks like the @ used was for sports and sports columnists. The one that stands out would be the pop singer @ShawnMendes. But it makes more sense since it he is a Toronto native pointed out here in this tweet.

Using the emoji package in Python, let’s take a look at the emojis that were used during this time:

Looks like people were laughing at the Warriors ? since losing this game, they are in a 3-1 deficit which is extremely difficult to overcome in an NBA Finals situation.

Here are some examples:

‘golden state playing like they don’t want another ring ?’

The sad ?face is probably realizing that the warriors will not win the game and most likely not the series now.

Here are some examples:

‘This could be the last game ever in Oracle ?’

‘Boogie came to Golden State for a free ring and now they’re actually relying on him to make plays in the finals ???’

Or maybe tears of joy:

‘seeing the warriors down 3-1 is just beautiful ?’

The T-Rex ? usage is interesting to point out since that was probably the closest emoji to a raptor.

It was interesting to look at what kind of languages were used with the langdetect package from Python. Some of the languages other than English that were detected include:

This shows how many people around the world tuned into the NBA finals and tweeted about it.

Series Continues with Game 5 on Monday