Skip to content
Object detection is a popular field within data science and has already produced excellent results. Object detection can read faces, count objects in a picture, count items in a room, and even track flying objects – think Millenium Falcon. Object detection has many practical uses, including pothole detection, a problem which has plagued drivers and city and state governments for decades. Weather, particularly winter weather, erodes streets and highways, creating potholes that can damage vehicles, cause accidents, and require expensive repairs. Fortunately, object detection can address this pothole issue.

So how did I do this?

Here are samples of the video:

Overall, I thought the experimentation was great. But I wanted to take this further with Mask R-CNN, a relatively new addition to object detection that I will talk about in the next section.

This process takes object detection further by adding an object mask in parallel with an existing bounding box for the region of interest shown in the GIF below.

This algorithm masks and detects the object of interest in parallel, which greatly increases the accuracy.

A company that has really been pushing the envelope of this field is MatterPort, a firm based out of the San Francisco Bay Area. They have kindly open sourced their work for others to reproduce. A great post from them on how to implement their code can be found here.

The steps to train were very similar to object detection.  I already downloaded a video and sliced it into many different images.  But, I used a different software to annotate the images called VVG Image Annotator. Instead of drawing bounding boxes, I drew polygons around the photos and saved the annotations in a JSON format, instead of XML.

I also followed the data inspection and model inspection notebooks, but adapted the code for pothole detection.  I also modified their training file as well and trained the model overnight.  There was a concern that CPUs were not good enough, but I felt that the training was just fine on my local machine.  I have an Intel Core i5 with 8 GB of RAM.

Here are a few examples of the output after everything was done: 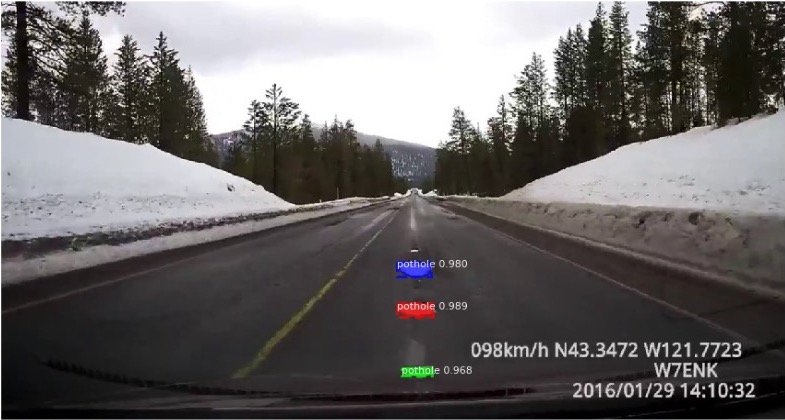 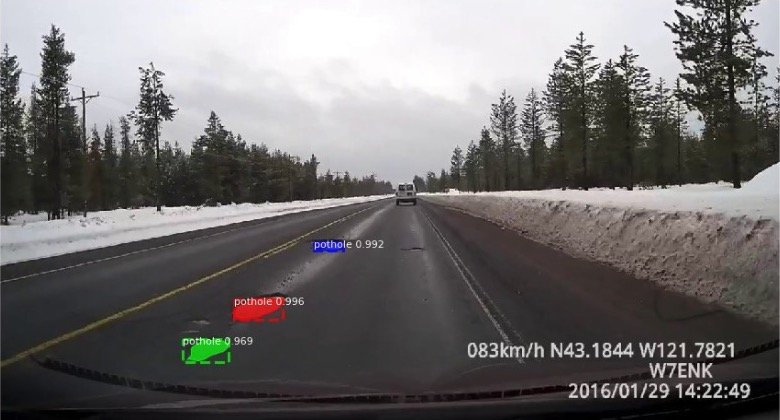 Here is the video that corresponds with the pictures:

Mask R-CNN can detect how many objects there are by assigning different colors randomly. But, after each image frame, the colors changed. I modified the code to keep the colors consistent.

Here are some statistics from both examples to compare.

There were also some misclassifications on both methods

Still, I feel the results of it are fantastic despite a few misclassifications.

We at SpringML can apply this concept to any object you want to identify in an image or video, whether using the out-of-the-box object detection models already built for a custom model for potholes as seen here.